India is land of rich culture and diversity attracting many national and international tourists all over the world. There are many Top Destinations in India and it is hard for the people to choose which place to visit in India. However some destinations in India remains to be most popular in hears of people. Below are the Best 10 Places in India capturing all the diverse charm in the country.

Akshardama is a temple for Hindus in New Delhi which is also referred to as Delhi Akshardama which displays the Indian Hindu culture. Swami Maharaj inspired and developed the building where 3,000 volunteers and 7,000 artisans helped in construction. 70% of tourists who visit
Delhi are attracted by the temple which was opened officially in the year 2005 located near the banks of Yamuna. The centre of the complex was built with vastu shastra and the all the temple is crafted with stone tells the incidents of life of Swaminarayan.

Lotus Temple located is a flower like shape construction completed in the year 1986 which is known for Bahai House of Worship. It has many awards for its architecture and serves as a mother temple for Indian continent. There are nine doors for the temple which is open to the central hall and is capable of holding 2,500 people. The surface is made of white marble and the whole temple property comprise of 26 acres and this land was donated by Ardishir Rustampur of Hyderabad in 1953. Audience are attracted for its architecture and fine art.

Agra Fort located in Uttar Pradesh is about 2.5km distance from the famous monument Tajmahal. It is a brick fort started by Hindu Sikarwar Rajputs. The present day monument is built by Mughals on the right bank of Yamuna. Many palaces, wells and mosques are built in the fort during the period of Lodi and about 4000 builders worked on it for 8 years. 5000 buildings are built excellently in Bengali and Gujarati style which are disappeared at present some by Shah Jahan and some by Britishers. 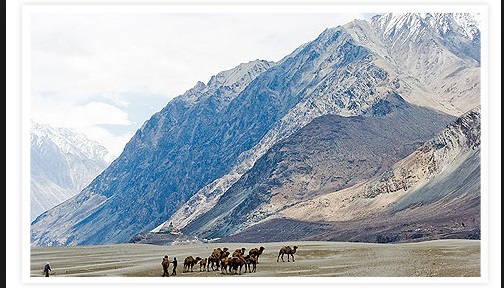 Ladakh located in Jammu and Kashmir is a place in India which lies between Kunlun mountain range and Himalayas. It is the most populated place in Jammu and Kashmir having the historical facts same as Tibet. It includes the Indus Valley, Zangskar, Lahaul and Spiti, Aksai Chin, Rudok, Guge and Nubra Valleys to its south, east and north. Leh is the largest town which is one of the abodes of Buddhism and the town is followed by Kargil as the second largest town.

Charminar is a mosque located in Hyderabad built in the year 1591. It is one of the greatest monument of Hyderabad which is located in the east of Musi River. Charminar which means “Four Towers” is located at the center of city for the eradication of plague and Muhammad Quli Qutub Shah prayed for the end of plague. He then established a mosque at the place where he prayed. It is a square structure with 20m long with four arches facing each other with 149 winding steps to reach the upper floor of the minar. The whole structure is made of granite, limestone, mortor and marble.

India Gate is the one of the Top Places to Visit in India which is located in New Delhi and was designed by Sir Edwin Lutyens. It is built under the remembrance of 70,000 Indian soldiers who fought and lost the lives for the British people during the First World War. It is 42 meters tall constructed in such a way that many important roads are spread out from the same place. The shallow domed bowl is filled with burning oil which is burning as a shrine under the arch of India Gate from 1976. It is considered as the source of pride for many Indian tourists.

Jama Masjid is the famous mosque of Delhi located in Delhi, India which is the largest known mosque commissionmed by Mughal emperor. It started its construction in the year 1650 and completed in 1956 which lies at the beginning of the Chawri Bazzar Road of Old Delhi. The mosque is capable of holding 25,000 worhsippers with three great gates , four towers and 40mtrs high. The whole chambers on the west side are a big hall with 260 pillars and along with this customers can also find Agra, Ajmer and Lahore.

The Kerala Back Water which is also known as Malabar Coast located in Kerala is a chain of lagoons and lakes. These are formed through action of waves and shore currents forming the barrier islands across the Western Ghat. It is a network of canals, rivers and inlets which are formed by 900 km of waterways. Many species like crabs, frogs and mudskippers, water birds and Kingfishers etc live in along the backwater. Artificial canals are connected with each other where backwaters form a means of transport for carrying local trade for inland navigation.

Ganges is also known as Ganga which is 2,525 km  in the western Himalayas in Uttarakhand which flows through Gangetic plain of North India to Bangladesh. It is the third largest river in the world and is treated as the sacred river of Hindus. Hindus worship as one of the goddess Ganga having historical provincials like Kara, Kashi, Allahabad, Munger etc located on its bank. It is ranked the fifth most polluted river in the world in the year 2007 threatening humans along with fish species, amphibian species and dolphins.

Taj Mahal is built in 17th century which is a tomb built in memory of his wife Mumtaz Mahal. It is located in Agra which is thought of as one of the most beautiful building in the world. It attracts million of tourists every year  and is chosen as the wonders of world in the year 2007 and is also listed in the UNESCO world heritage site. It is an example of Mughal architecture with building design from Islam, Persian and Muslim arts. The building is built from the material all over the world with 10,000 people helped to move the materials for the building. The construction was finished in the year 1653 and many people feel that it is one of the most beautiful buildings in the world.