Comedy has become one of the famous and funny shows that air on Indian Television. This show has a lot contribute in hindi industry. It has its own share of excellent comedy shows and sitscoms. “The Great India Laughter Challenger” , Mtv Bakra, Comedy Nights with Kapil etc are the comedy reality shows. Here is the list of Top Ten Indian Hindi Comedy TV shows as mentioned below. 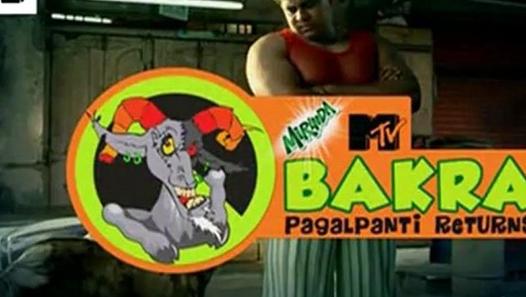 It is one of the famous and well known show for the people in India. This show was anchored by Cryus Broacha. The main concept of the show is to make the people show with sudden interaction of person and they reveal each one had been made Bakra of themselves.

She is a young actress, stand-up as comedian , she is one of the youngest comic stars on TV and started acting in front of camera from the age of 3 years.. The show was started in the year 2008 with the name of Saloni Daini. She participate in many shows and movies and proven that kids can do any thing.

It is an Hindi Comdey Darma which was started in the year 2002 on Sep 2. The show has completed 98 episodes which is hosted on Star Plus Channel. This show is widely considered as audience, because the story , revolved around Gujrati family is a joint family and the comedy came from the part of the problems. Tulsidas, Jayasree, Hansa, Praful are the main characters of the story. Aatish Kapadia is the writer and Aatish Kapadia is director of the story.

It is Comedy show which was started in the year 2004 which airs on Star One/TV Asia channel. The main story of the show features about middle class and high class Gujarati family. This shown had received a best TRP rating and positive response from the public. Aatish Kapadia is writer of the story and directed by Deven Bhojani.

It is an reality based comedy , the show started in the year 2007 on June 16. This show recently has completed four seasons that airs on Sony entertainment Television . Archana Puran Singh and Arbaaz Khan are the Judgers of the show. The main concept of the show is to make the people laugh and have a good relaxing . Mukti Mohan and Kapil Sharma is the winner for 4th season show, Krushna, Sudesh, Mellisa for 3rd season, Juhi Parmar&Vijay Ishwarlal Pawar for 2nd season and Kshif Khan/Ali Asgar for 1st season are the Comedy circus Winners in the four seasons.

This is the show produced by Jaya Bachchan under the banner of Saraswati Audio Visuala Pvt Ltd. It is one of the most famous hindi comedy show was started in the year 1993 as first performance on Doordarshan channel. DD National, Sony TV and SAB TV, the show has several re-runs and it is still considered as a classic, among India Television shows. Deven Bhojani, Farida Jalal, Navin Nischol, Vishal Singh, Nattasha Singh are the few main role of the show.

she is a actor in Hindi and Punjabi films, stand-up comedian on Season 4 ‘The Great Indian Laughter Challenger’ as a finalist. She got recognition in the country as ‘lalli ‘ the role that she performs. She has won many awards for out casting talent and also participant in many shows which includes Jubilee Comedy Circus, Comedy Circus Ka Naya Daur, Comedy Circus Ke SuperStars etc. In recent years, she has became a famous comedian and also performed in many movies now a days.

It is one of the most successful comedy show on Indian television which was started in the year 2005. This was hosted on Star One Channel and approximately runs 48 minutes and set designed by Nitin Chandrs Desai. It has been presented four seasons of the show and given some of the most amazing outstanding performance and judged by Shekhar Suman, Navjot Sidhu.

It is a Famous comedy show and has won many awards which include RAPA Awards, ‘Best Comedy award during the year 2001and 2002. The show telecast in hindi language that airs on SAB TV which was started in the year 2001 on September 3rd. The main role and central character of the story played by Pankaj Kapoor of Musantilal was always in a troubles, with different problems every time. Shukla-Sanjay Mishra, Bhatia-Manoj Pahwa, Patel-Deven Bhojani are the few important characters of the show. Ashwani Dhir is the writer of the story and Rajiv Mehra is Director and Approx. plays 24 minutes.

It is an Indian Well- Popular Comedy show which runs from the year 2013 on June 22. The show has mixed format with Sharma acting out skits on stage with supporting characters, while also interacting with members in the audience and permanent guest Navjot Siddhu. The show mainly features with Celebrity guests promoting their latest films. The show telecast approx 60 minutes that airs on Colors TV Channel which is presented by Comedian Kapil Sharma. In the recent year as of 2013, Kapil Sharma received an Entertainer of the year award . ‘The Kumars at No. 42’ is context show of British TV show which is similar to Comedy Nights with Kapil TV show in India. According to Trp rating it has placed Top 1 Comedy show in India. The few important characters of the show are Kapil Sharma, Sumona Chakravati, Upasana Singh, Naseem Vicky.